Hello, fellow drama cd lovers. Yes! I am still alive!
The lack of updates in this blog and the listing is due to several reasons.


Probably brought by karma, my PC has been broken for 5 weeks now. Since I'm currently a week off from work, I got myself to catch up with drama cd and updating my listing once again. Apart from that, I have moved the list into excel spreadsheet for better organization. I have always wanted to use this format. However, my lack of literacy working in excel kept me away from it. It's very easy to use when you know what to do actually. ( •̀ᴗ•́)و ̑̑

Link to updated listing!
Yusa Kouji List | Yamanaka Masahiro List+
Some information are still blank. You can help filling them up if the cells are not locked. I feel Yucchi's list won't be updated very frequently as he has gone silent for a quite a while (his new blcd will be out in october btw!). Meanwhile, Yamachan.... is more active on the R18 side than BL. (´w` ); Although I love his voice, I try to avoid his r18 cds for reasons even I can't explain. It is the same case as Maatan where I stopped listening to his R18 works when he just keep popping every month with new ero cds. www (Good for him tho!) Hence, I may not be able to provide recommendations in R18 category except for a few of his older works.

Hopefully the new format will be much easier to refer to. Please let me know if there are any titles I had missed! 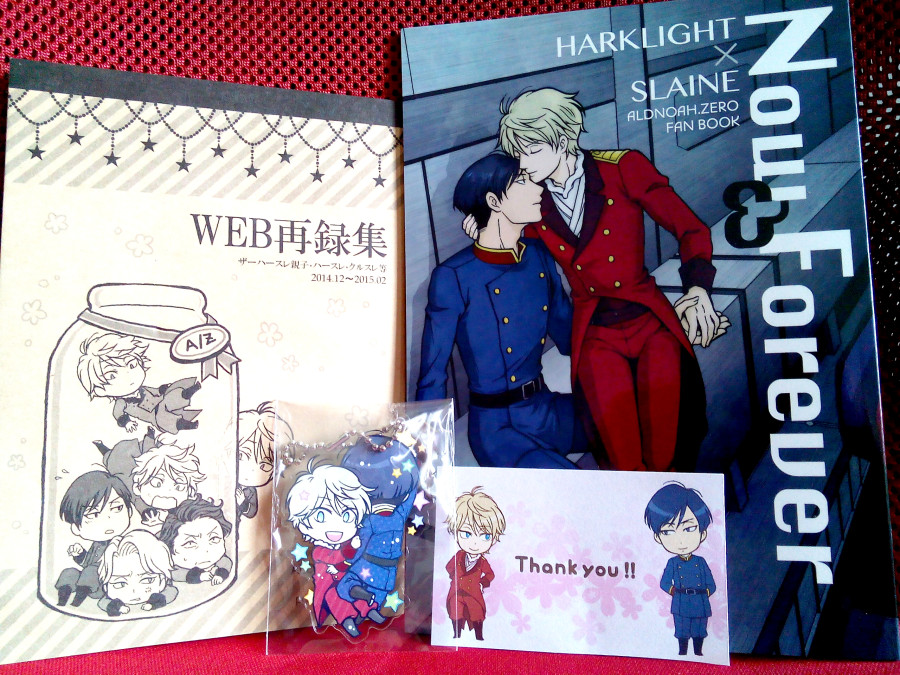 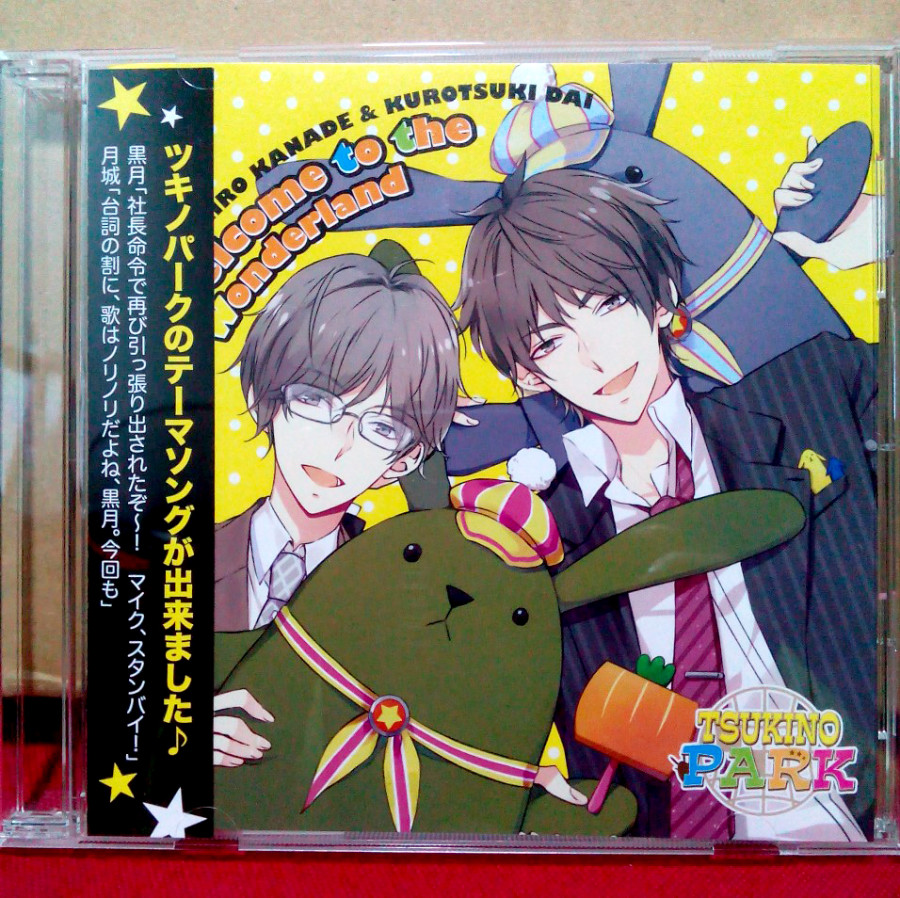 December was really painful for my wallet due to several reasons. 1) I got myself a PC!! Mainly to cater my needs for games (mmo mostly). It was one of my longest life goals so glad it has come true now. 2) Yearly convention which has been the only event that could make me spent a lot in 1 day. www

I'm a total fanatic over Harklight x Slaine (Aldnoah.Zero) ship, and @YKT_az did very very good Hasure fanarts (lots of them too). Only when she open orders for the acrylic keychain I was able to get the Now & Forever fanbook since Toranoana doesn't accept debit card payment. Sadly, I was out of budget when the preorder opened (november) so I couldn't get one more fanbook she has. T__T

I need more of Yamachan's singing hence, also bought TsukiPro series character song 「Welcome to the Wonderland」. Still waiting for the day he will do a Kabedon SONG. I mean, it is suspicious enough that Yamachan hosts IrisQuartz radio without releasing any CD under the said label (of course the adult version is not him). xD 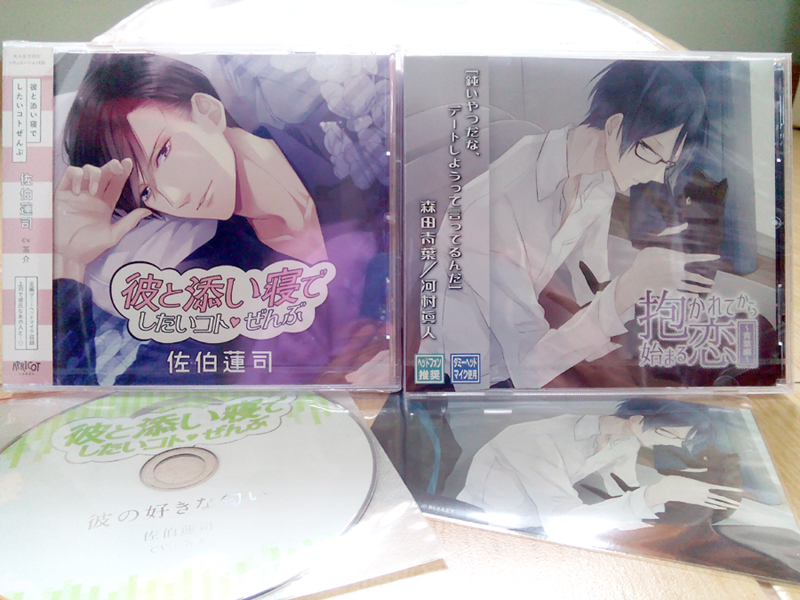 In order to make this LJ slightly more active, I've decided to make posts on my occasional loots from time to time! ヽ(･ω･)ﾉ

As for this November, I've acquired:

Meanwhile, Yamanaka's Dakarete CD!!!!!! It was so good!! Despite being hopelessly majime, he softens up and became so endearing whenever he comes home and talk to his cat. Listening to it gave me a sweet, fluffy, and happy feelings -- countless of pillow throwing too. ww I enjoyed every moments they had: the rain scene, their date... (〃´ω`〃) 10/10 definitely a worth purchase!

My new bias, Yamanaka Masahiro! I call him Yamachan most of the time; a pure (maybe not) angel/moeblob with a maiden heart (｡U‿U｡)♡. I started become aware of him from the game 『神学校-Noli me tangere-』, where he voiced Robert Carahan (♡♡♡♡). Of course due to pseudonym, I didn't know who he was until I recognized the same voice in Sora to Hara drama cd a year later.
After various of minor characters in BL, Yamachan finally gained a main role in 2014 with MAKARE drama CD (uke debut!), followed by Galtia (BL game) this year. I was super ecstatic during those times; 3 years agonizing over the lack of his voice, glad he's gaining more roles now! (((*°∀°)

This listing will have both BLCD and R18 Situation CD works. Since he is more active in the latter department, that section might be longer/more frequently updated. ^^; (New!) Starting 18/10/2017, I have moved the list from this LJ post to an excel spreadsheet for better viewing. There are 3 categories (tabs) to choose: SEME, UKE, R18. Similar to my other BL listing, I won't include titles where he's a supporting character with no involvement in intimate scenes.

If you wish to share the list, please link to this LJ post.
Lastly, if there's any titles that I missed, feel free to let me know! ヽ(･∀･)ﾉ

Hello, to those who are still following this blog (thank you very much!)
Yusa's listing is finally updated with the following titles:

Fusoku no Renjou
Maeno Tomoaki x Yusa Kouji
Kachou Fuugetsu and Fusoku no Renjou were last year releases, while the rest are this year. Yep, not that many which result to less frequent update on his listing. ^^; Although similarly few, I am not that alert with his otome/situation CDs. So if there's any titles that I missed, please let me know! Yucchi has become a rare species nowadays! ( ;Д;)

On other note, I've successfully graduated almost a year ago. Currently still adapting to the daily schedule of working adult and trying my best to juggle time for drama cds/games/seiyuus/animes. Speaking of drama cds, there are times where I indulged R18 cds more than blcds. ww Which lead me to add more seiyuus into my bias list.

I am especially crazy over Yamanaka Masahiro currently especially after he has made major(main role) debut in blcd last year and blgame this year! He's a real life otome in person too! (≧∇≦) Hence, I am planning to make a listing for him as well. The list will have his BL and R18 Situation works.

Hello!
I may disappear for one whole year without updating my listing nor this blog but I'm still around.
I'm one term away from graduating (if everything goes well!). Apart from the many things to do at this point, I still juggle my time for drama cds and other internet hobbies (such as, spazzing on twitter). lol During term breaks, I always use them up to catch up with games (mmo and newly released VNs). Therefore, apologies for updating once in a blue moon. orz

Warudakumi ni mo Hana wa Furu
Hatano Wataru x Yusa Kouji
I might missed some titles (for BL and otome) because there was a time I had a pretty hectic day on at the time I listened to drama cds. Hence, I may forgot to take personal note on some titles. Let me know if I missed any. :D
Anyway, with the raising names such as Ono Yuuki and Okitsu (and others), I do realize there are even lesser cds from Yusa lately. I do listen to their cds (especially Okitsu's), but I'm starting to miss Yucchi's glorious days in BL!

Well, at least I could see him 'having fun' as Midousuji in Yowapeda. 8D
Until next time!

Just a quick post to let everyone know that I have updated the Yucchi listing (blcd and otome cd). Sorry for so much delays. ^0^;

Another quick note:
I might as well cancel out my personal drama cd listing as I can no longer afford to put an extra time updating them. I will delete those posts soon but don't worry. Yucchi listing will stay; the same goes for drama cd reviews! :) (Terribly sorry for not able to share more reviews for quite some time. y_y)

First of all, I am simply grateful to find people still drop by and find my Yucchi listing being useful despite I haven't update it for over a year. Thank you so much everyone! ヽ(；▽；)ノ Sorry that I didn't pour my time for an update since my term break are always distracted by games (BL/mmo). QvQ Receiving very frequent visits at my Yucchi listing lately made me realize I should really really come back and refresh my memories as to why I have decided to put up a Yusa Kouji BLCD listing 4 years ago (I'm surprised too!).

Also,
I attended Sawachi Nijikai (a BL con!) for the first time last week. Hoo boy, it was overwhelming with lots of fangasming and fanservices. Since AF decided to arrange mini events/meeting in CF last year, plus, seeing Sawachi have the potential to go bigger; it seems my BL hauls would be growing as well. 8D Not to mention, I've been lucky in both AF mini event and won a BL manga each. \o\

And of course, I wouldn't miss the chance to buy BL mangas (japanese) myself despite I'm not very literate in kanjis. orz 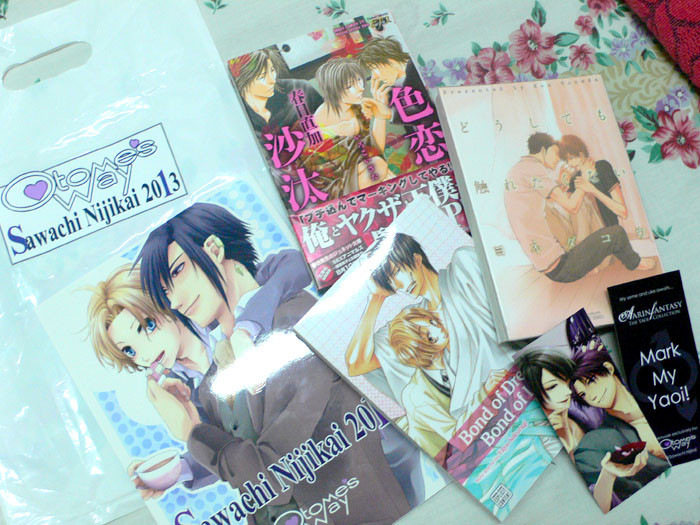 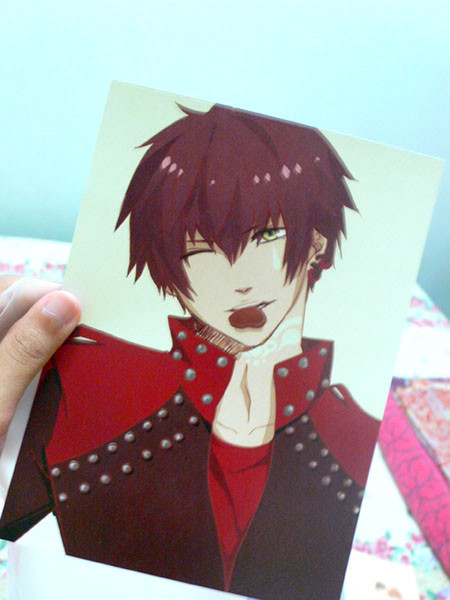 [Top: Doujin from Otome's Way, 夢結び恋結び vol 1 won from AF booth. Bought どうしても触れたくない as my support token to Yoneda Kou, and 色恋沙汰 because I saw some raep and bondage going on while flipping through the pages! (ц｀ω´ц*). + special AFxOtome's Way bookmarks~
Bottom: MIZUKI PRIIIINTTTT (DMMd) ]

DMMd wallpaper on my phone~

I was thinking to have all the characters shown, but then, my phone wallpaper looked so crowded.
..and besides, I just finished one route (Koujaku's) so I can't decide a favourite yet in order to feature a solo character.

So I made the 'Jerry Blaine' logo on Aoba's shirt as the main attraction.

Yeap. Just started playing DMMD.
And yeap, just wasting my time because the assignment phase is finally over (but here comes tests/exams). =u= I received a mail from ComiComi Studio on Thursday, saying that the item I ordered was being shipped. Since I never had any experience of purchasing stuff online before, even more from Japan; I didn't thought it would arrive this quick! So YEY!

I missed the postman who came around 2 p.m. "orz But thankfully brother was home and he offered himself to pick it up for me while he was on his way out. o/ The moment he did and handed the package to me, "It's big!" he said. lol
I immediately ditched my assignments-in-progress and start opening the box! YES! You got it!
It's Yusa Kouji personalized alarm clock! *flails*
I'm a happier fangirl when Yucchi's picture is on the character phamplet too! \o\ /o/ Well, obviously, the instruction manual is completely in Japanese. ^^; I still can't read Kanjis well enough so I had Ponytale to help me with some of the instructions. But it's good that the manuals are guided with images so it wasn't all hard to explore the features myself. :D
Copied the tracks to my lappie and listened to the freetalk.
Yucchi said not to lodge any complaints if he failed to wake us (the customers) up with the alarm clock. ROFL!
HIS COMMENTS ABOUT THE CLOCK IN THE FREETALK IS SO FUN TO LISTEN TO! HE SO ADORBS. ;-;
/cough.

It costs me 10900yen including the shipping price (which is about RM398 overall).

It cost me that much but I'm happy with my purchase! /o/
YUCCHI, I know it's not much but I NOW OWN 2 OF YOUR STUFFS. ;u;
(Also, I'm currently waiting for my order of Kaito Nendoroid from GOODSMILE; which will be shipped on 21st March~)

I'm hoping the same clock will be released for Maeno Tomoaki! *_*
But I'm crossing my fingers for that to happen in many many MANY months later. Need some time to top-up my savings for purchasing my fandom goods. XD
Collapse